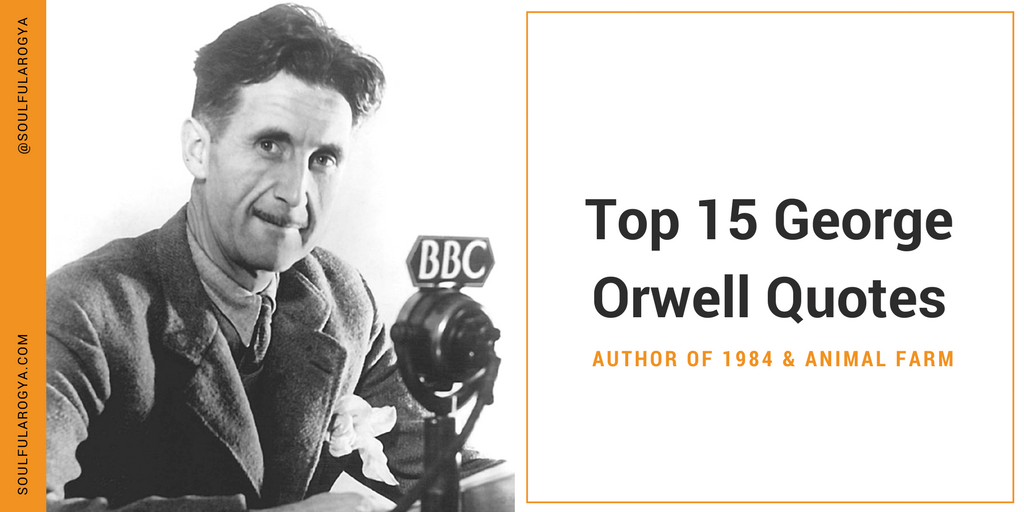 George Orwell was a renowned British writer and critic. He is best known for his allegorical novel Animal Farm and the dystopian novel 1984.

Orwell was an outspoken critic of totalitarianism and supporter of democratic socialism. He also garnered praise for his non-fiction work which included The Road to Wigan Pier, documenting his experience of working-class life in the north of England, and Homage to Catalonia, an account of his experiences in the Spanish Civil War. He was also well known for his journalism and essays.

In 2008, he was ranked #2 on a list of “The 50 greatest British writers since 1945” by The Times. The term Orwellian has now become descriptive of totalitarian or authoritarian social practices and has entered the language together with many of his neologisms, such as Big Brother, thought police, newspeak, and doublethink.

Here’s a collection of 15 of his most thought-provoking quotes.

Note: A large portion of the quotes here are borrowed from his books and essays.

2“In a time of deceit telling the truth is a revolutionary act.”

5“The best books are those that tell you what you know already.”

6“Perhaps one did not want to be loved so much as to be understood.”

7“Political language is designed to make lies sound truthful and murder respectable, and to give an appearance of solidity to pure wind.”

8“If liberty means anything at all, it means the right to tell people what they do not want to hear.”

9“Power is in tearing human minds to pieces and putting them together again in new shapes of your own choosing.”

10“The choice for mankind lies between freedom and happiness and for the great bulk of mankind, happiness is better.”

11“On the whole human beings want to be good, but not too good, and not quite all the time.”

12“Journalism is printing what someone else does not want printed: everything else is public relations.”

13“All the war-propaganda, all the screaming and lies and hatred, comes invariably from people who are not fighting.”

15“The greatest enemy of clear language is insincerity.”

Hope you enjoyed these George Orwell quotes. If you’ve never read George Orwell’s work before, we highly recommend you check out the collection of his best books featured below.