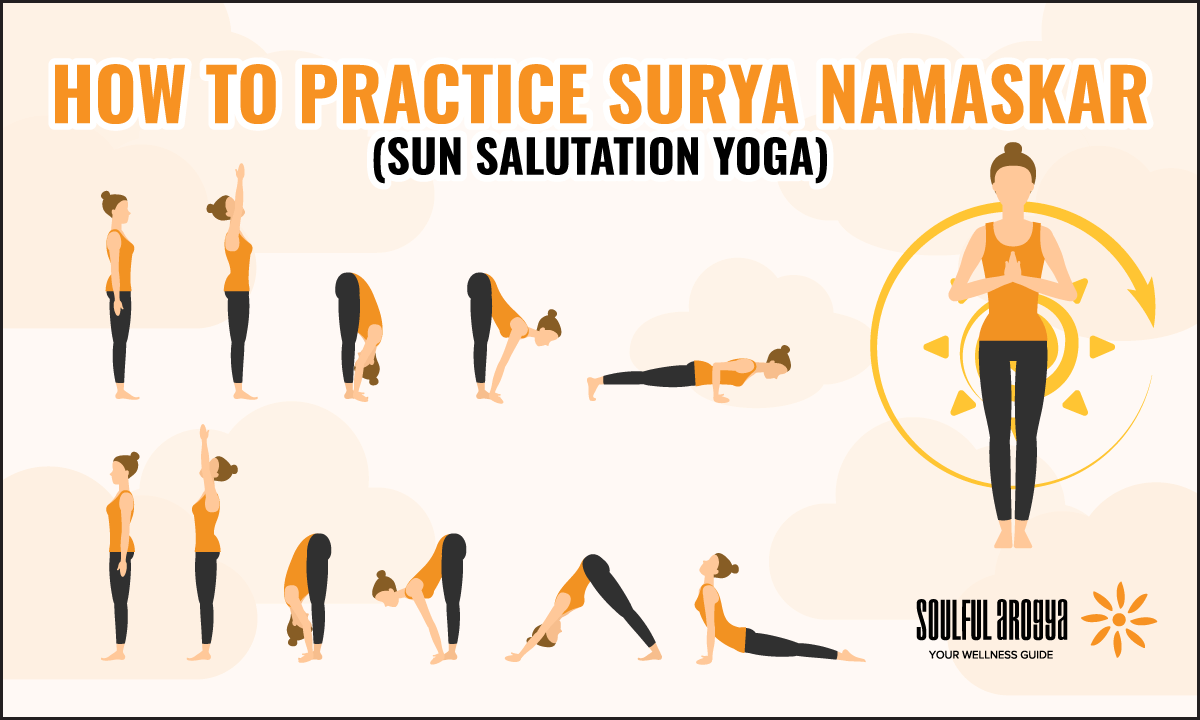 Surya Namaskar or Sun salutation is an ancient yoga technique to calm the mind and keep the body in good shape. It is a sequence of poses or asanas that provide a good cardiovascular workout.

In Ancient India, Surya Namaskar was practiced to express gratitude to the sun for sustaining life on Earth.

Surya Namaskar is recommended to be performed on an empty stomach, early in the morning. However, one can also practice these asanas in the evening, provided there is a gap of at least two hours after eating. Pranayama breathing exercises and other asanas are usually synchronized with Surya Namaskar.

Surya Namaskar can also be accompanied with mantras – one at the start of the practice and one at the end. Both these mantras have been mentioned at the end of the article.

Here’s an infographic on how to practice Surya Namaskar and step-by-step instructions to Sun salutation yoga. 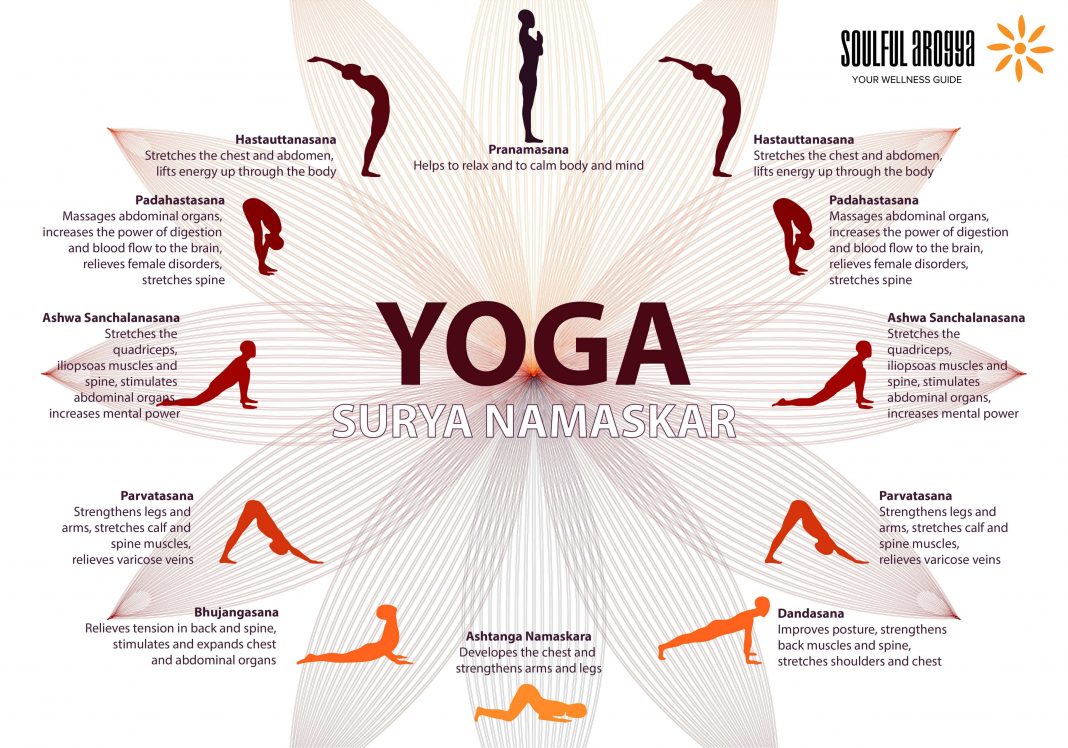 How to Practice Surya Namaskar (12 Steps)

Stand at the edge of the yoga mat. Keep your feet together and balance your weight equally on both feet. Take a few deep breaths in this pose.

As you breathe in, lift your arms up and back, keeping the biceps close to your ear. Bend the trunk and head backwards to create a slight curve. Breathe deeply in this pose.

As you breathe out, bend forward from the waist. Make sure your spine is erect. Bring the hands down to the floor, resting beside the feet.

From the position of Hasta Paadasana, push your right leg back as far as possible. In the process, bend the right knee without changing its position. Arch the back and tilt your head slightly forward. Look straight ahead. Breathe deeply here.

As you breathe in, take the left leg back and bring the whole body in a straight line. Stay in this position for at least 30 seconds and breathe slowly and deeply.

From the stick pose, bring the knees down first and then the chest and the chin. This step is called the eight-limbed salutation as eight parts of the body are touching the floor – two feet, two knees, two hands, chest, and chin. Make sure the hips are raised slightly above the ground.

Now lie down on your stomach with hands on the side and toes touching together. Raise your head and trunk slowly with the help of your palms alone. Arch your neck slightly backwards, so that the pose looks like a cobra with raised hood. Breathe normally and feel the stomach press against the floor.

As you exhale, lift your hips and tailbone up, and chest downwards in an ‘inverted V’ posture.

Breathe in deeply, bring the right foot forward between the two hands, left knee down on the floor, press the hips down and look straight ahead.

Exhale and bring the left foot forward. Keep the palms on the floor.

Breathing in, lift your arms up and back. Bend the trunk and head backwards to create a slight curve.

As you breathe out, straighten your body first and then bring the arms down. This pose is called Tadasana. You may also end the practice with the prayer pose. Relax in this position. Observe how you feel after one round of Surya Namaskar.

Shavasana or corpse pose is usually practiced at the end of Surya Namaskar. As you lie down on the yoga mat in this pose, observe the sensations in your body. Continue to breathe deeply.

The following mantra is pronounced at the start of the practice:

Translation: Always worship the sun sitting at the centre of the solar system, on Lotus, wearing a crown and having a glittering golden body.

The following mantra is pronounced at the end of the practice

Translation: Those who practice Surya Namaskar daily do not face poverty in life. One does not face early death or suffer from diseases. Drink the water kept before the sun.