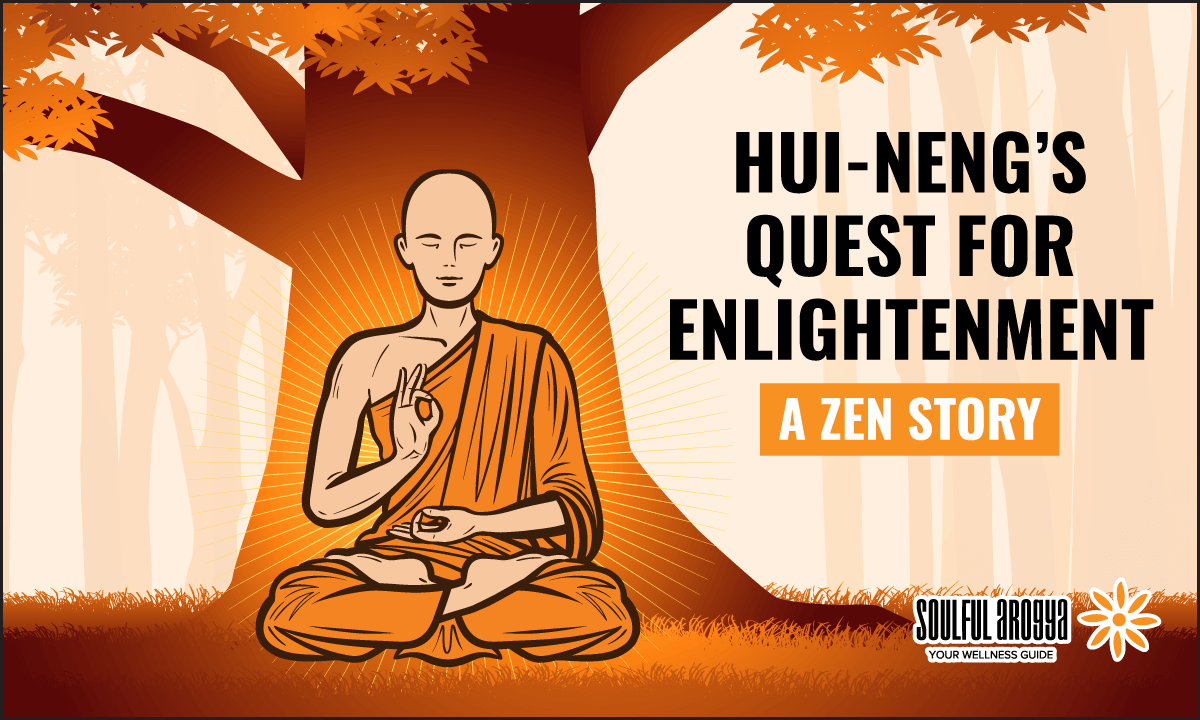 Hui Neng was a Chinese Buddhist monk who is counted among the most prominent masters of Chan Buddhism (Zen Buddhism). The Platform Sutra, one of the three scriptures of Chan Buddhism, is an autobiography of Hui Neng and his understanding of life and spirituality.

Born in 7th Century China, he grew up under circumstances of extreme poverty. His father died when he was a child due to which he never received any education and is said to have lived his whole life as an illiterate.

This impediment, however, didn’t stop him in his quest for enlightenment.

The Story of Hui-Neng’s Enlightenment

As a young adult, Hui Neng approached a prominent Zen monk to become his disciple.

The master, having noticed an aura around Hui Neng, said, “Why have you come to me? You don’t have any need to come to me.”

Not understanding the master, Hui Neng thought this as a rejection. He persisted. The master said: “Even if you become my disciple, I can’t teach you anything. You are already in a state of meditation. There is no need for you to have a master.”

But Hui-Neng remained adamant. He had come to seek enlightenment from the great master. He was not going to leave until this great man accepted him in his monastery.

Accepting defeat, the master told him to work in the kitchen of the monastery.

Hui-Neng was delighted. He would work under this great Buddhist monk and finally seek wisdom and enlightenment. But there was a condition from the master.

He said, “You will be in this monastery under one condition. You will not leave the kitchen and you will never come to me again. I will come to you.”

No meditation technique was given to Hui Neng nor was anything taught to him. He was just told to work in the kitchen. Hui Neng accepted without saying a word to the master.

These monks were amazed to find a person like Hui Neng in the kitchen doing chores and nothing else. He wouldn’t meditate, he wouldn’t read any scriptures, and he wouldn’t come out of the kitchen. He did what his master told him to do.

At first curious of his presence there, they soon started ignoring him, assuming that he was a servant.

Twelve years passed, but Hui-Neng didn’t leave the kitchen. He continued to do his daily chores and he never approached his master again as he was forbidden to do so. The other monks in the monastery continued to ignore him.

As the master approached the twilight of his life, he declared to his disciples that his death was near and he would appoint a successor soon.

So he announced: “Those who think they are enlightened should compose a poem of four lines. In these four lines, you should summarize all that you’ve learned in life thus far. If I see enlightenment in these lines, I will choose that person as my successor.”

Among all the monks, there was one great scholar who was considered more intelligent and knowledgeable than any other scholar in the monastery. He knew all the scriptures word for word. Knowing that this scholar would be the master’s successor, others didn’t even attempt the poem.

The scholar composed a poem which contained these four lines:

dust gathers on it.

Clean the dust, and

Yet, even this great scholar was full of doubts after composing the poem. He wasn’t sure if his master would approve of it.

Having read all the scriptures, he had composed a poem that he knew was right by the books. But he was still afraid to show it to his master as he had an uncanny ability to know who was enlightened and who wasn’t.

The knowledge that he had attained was through the scriptures and he knew nothing else. He became anxious and frightened of the prospect of showing the poem to the master. He was afraid of the master’s disapproval and the humiliation that would follow.

So he made a decision. Late at night, he went to his master’s abode and wrote the four lines of his poem on the wall without signing his name. If the master liked the poem, he would come forth and declare that he had written the words. If he disapproved, he would remain quiet.

The next morning, the master woke up and saw the four lines written on the wall.

Much to the scholar’s delight, his master said, “Whoever has written this poem is an enlightened being.”

Everyone in the monastery began to talk about the wise words written by the scholar.

As some scholars were talking about the poem in the kitchen, Hui-Neng overheard the lines and burst out laughing. No one in the monastery had heard his voice before, so they were taken aback when they saw him laughing. They had assumed he was an idiot and they were greatly offended that such a person would laugh at the poem of a wise scholar who would soon be their master.

Someone asked, “Why are you laughing, you idiot? You think a mere servant like you who knows nothing about this life, this existence, can laugh at such wise words?”

Hui-Neng replied, “I’m laughing because this poem is wrong.”

Hui-Neng said, “I’m an illiterate, but I know these words are wrong. Since I can’t write, I request one of you to come with me to the master’s abode. I will narrate whatever needs to be written on the wall.”

Now it was the turn of the scholars to laugh. A larger crowd gathered around the kitchen and someone decided to go with Hui-Neng to the master’s abode as a joke. When they reached the destination, Hui-Neng told the monk to write:

“There is no mind

and there is no mirror.

So where can the dust gather?

One who knows this is enlightened.”

By then the master had returned to his abode and as he read the words on the wall, he said firmly to Hui-Neng that he was wrong. Hui-Neng was disappointed but he didn’t say anything. He simply touched the master’s feet and returned to the kitchen.

In the night when everyone was asleep, the master quietly entered the kitchen where Hui-Neng was sleeping.

He woke him up gently and said, “You are right, but I couldn’t say that in front of those learned idiots. If I had said you were right, then I’d have to appoint you as my successor. Those idiots would never accept you as their master. They’d have killed you. So escape from here right now! You’re my rightful successor, but do not say this to anyone. I knew you were enlightened the day you came to me. I noticed the aura around you immediately and it was growing. Hence there was no meditation given to you. There was no need. You were already in meditation. And these twelve years’ silence with no meditation has completely emptied you of whatever remaining ego you had. And the aura has become complete.

“There is another reason why I call you my successor. You have been here all this while and your aura has been constantly spreading to others, but no one observed it. Not even the wisest of my disciples. I posted you in the kitchen because everyone visits the kitchen 3-4 times a day. I thought if one of my disciples was wise enough to notice your aura, I’d know my teaching has at least succeeded in enlightening one person. But that wasn’t the case. Twelve years you worked here and no one recognized your aura. So escape from here.”

Hui-Neng is one of those rare individuals who didn’t require meditation to attain enlightenment because he was already in a deep state of meditation.

In other words, he was completely submerged in mindfulness. He was totally egoless.

In the book Krishna: The Man and His Philosophy, Osho is asked why Lord Krishna didn’t meditate. His answer: Krishna’s whole life is meditation, so there is no need for him to meditate. Krishna is already in a deep state of siddha which is the ultimate state of mind. Krishna begins where Buddha ends.

For some, siddha or enlightenment is attained after a big struggle and long hours of deep meditation. For people like Hui Neng who are already in a deep state of meditation, there is no need to struggle. Their whole life is meditation.

H/T: The Book of Secrets by Osho

Editor’s Note: There are many variations of this story on the internet. The story presented here is inspired by Osho’s version of the story.

If you wish to buy the books mentioned in the article, the links are given below: