Home Pranayama An Introduction to Patanjali’s Eightfold Path of Yoga 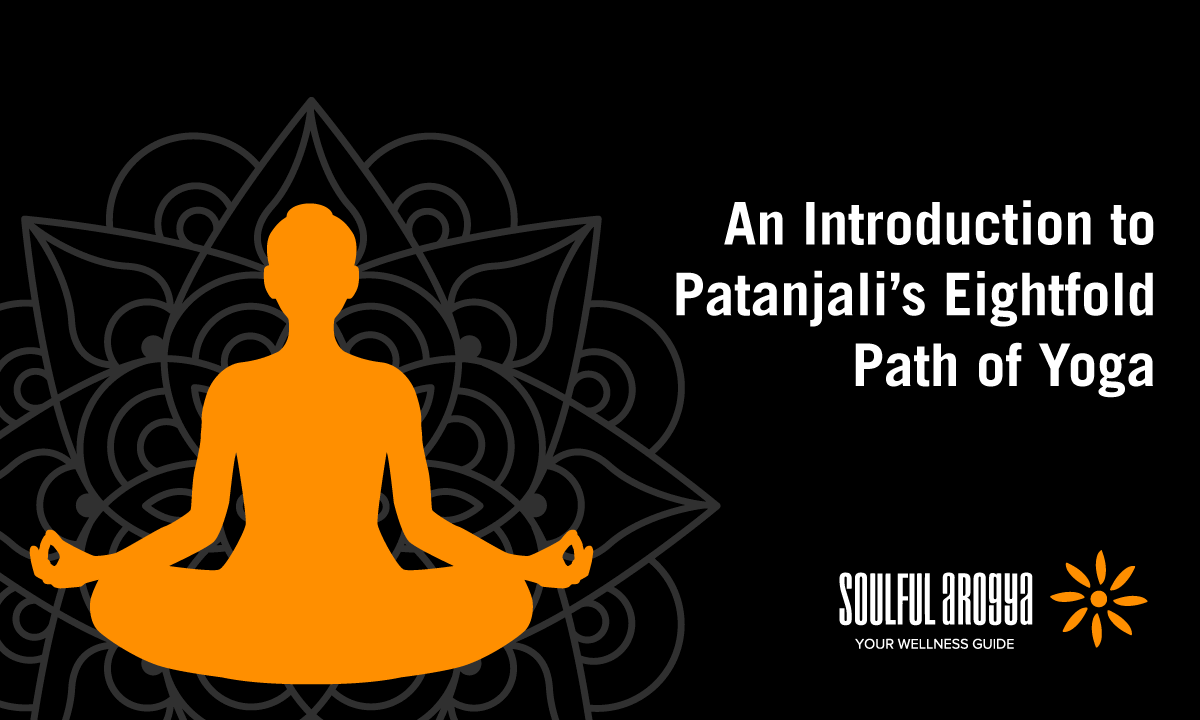 This article is an introduction to Soulful Arogya’s Yoga 101 series where we explore steps and benefits of beginner and intermediate level yoga asanas.  Before practicing yoga, it is useful to understand the origin of Yoga and the Eightfold Path of Yoga as enumerated by Patanjali – the father of Modern Yoga. Our hope is that by gaining a deeper understanding of the roots of yoga, you will be able to appreciate this wonderful practice even more.

The word ‘Yoga’ is derived from the Sanskrit word ‘yuj’ which means union or communion. It is one of the oldest systems of Indian philosophy. Even older than the Vedas and is mentioned in the Rig Veda. It was collated and systematized by Patanjali in his classical work, Yoga Sutras.

In the sixth chapter of the Bhagavad Gita, Sri Krishna explains the meaning of Yoga to Arjuna as a technique to liberate oneself from pain and sorrow. It is said:

“When his mind, intellect and self (ahamkara) are under control, freed from restless desire, so that they rest in the spirit within, a man becomes a Yukta – one in communion with God. A lamp does not flicker in a place where no winds blow; so it is with a yogi, who controls his mind, intellect and self, being absorbed in the spirit within him. When the restlessness of the mind, intellect and self is stilled through the practice of Yoga, the yogi by the grace of the Spirit within himself finds fulfilment. Then he knows the joy eternal which is beyond the pale of the senses which his reason cannot grasp. He abides in this reality and moves not therefrom. He has found the treasure above all others. There is nothing higher than this. He who has achieved it, shall not be moved by the greatest sorrow. This is the real meaning of Yoga – a deliverance from contact with pain and sorrow.”

The ultimate goal of yoga is liberation (moksha) from pain and sorrow. Yoga teaches the means by which the individual human spirit (jivatma) can be united with the Supreme Universal Spirit (Paramatma). In the Kathopanishad, Yoga is defined as ‘the steady control of senses and mind. One who attains this state is free from delusions.

In Patanjali’s Yoga Sutras, yoga is described as ‘Chitta Vritti Nirodhah‘, meaning restraint (nirodah) of mental (chitta) modifications (vritti). The word chitta has a deeper meaning than the word ‘mind’ as it refers to mind in its collective or total sense. A closer meaning would be consciousness. Chitta is comprised of three elements which can cause these mental modifications or fluctuations. These are Manas (Mind in its individual sense), Buddhi (intellect or reason), and Ahamkara (pride or ego). Yoga is the technique by which these mental fluctuations or modifications can be altered. The restless mind is therefore calmed and the energy is directed into constructive channels.

The Yoga Sutras of Patanjali consists of four chapters: Samadhi, Sadhana, Vibhuti, and Kaivalya. The second chapter, Sadhana (the means to achieve yoga), describes the eight limbs of Yoga aka Ashtanga Yoga. Each limb of yoga is described below: