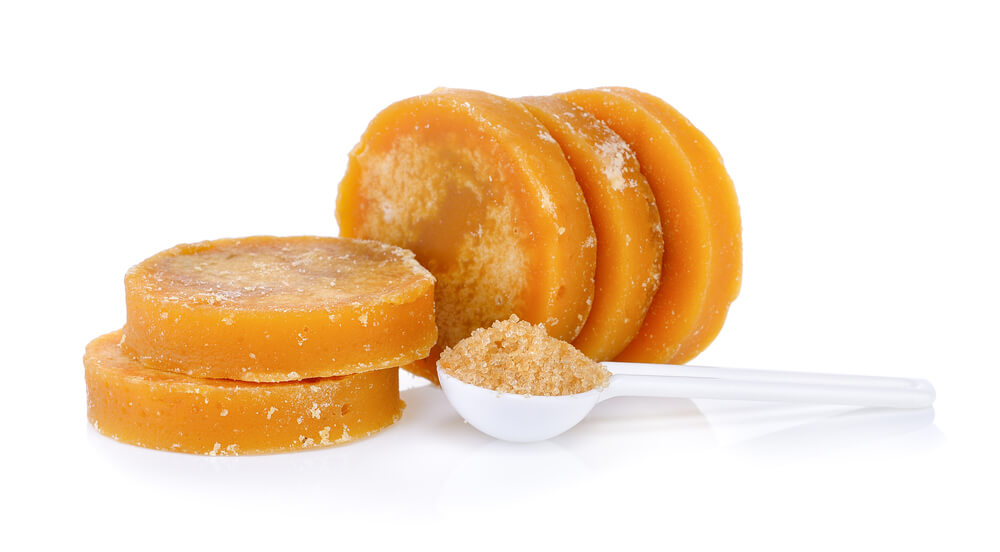 If you’ve ever been to India, then you must be familiar with this yellow (or sometimes brown) unrefined mass of sugar often being sold in open markets. Although not as widely used as refined sugar, this sugarcane extract is proven to offer a myriad of health benefits when compared to its processed sibling. So, when it comes down to Jaggery vs sugar, which one is healthier?

With the growing concern of obesity, people are looking for natural alternatives to replace refined sugar. Like coconut sugar, jaggery is also getting a lot of eyeballs lately.

A major portion of the world’s jaggery production is contributed by India, which explains why it so commonly available here. Jaggery has been a household commodity since 3000 years and also finds its relevance in ancient Indian scriptures related to medicine.

Let us explore more on this supposedly better alternative to refined sugar and the benefits it has to offer.

Jaggery is a concentrated product of cane juice or even date or palm sap in some places.

The process of preparing jaggery involves three steps namely Extraction, Purification, and Concentration. The sugarcane juice is first extracted and then heated on a furnace. Lime is added to the liquid as it makes impurities float on the surface, which are then skimmed away. The remaining semi-solid juice is then cooled in a large flat bottom tank for speedy evaporation and later sold in the market.

The color of jaggery varies between golden yellow and dark brown depending on the raw material used and its purity. Different types of jaggery have different characteristics. We will be mainly exploring the benefits of organic cane based jaggery as it is more commonly available.

Jaggery vs Refined Sugar – Is it a Healthier Choice?

Jaggery is an unprocessed extract of sugarcane with molasses in it. It is also popularly known as ‘Medicinal Sugar’. Refined sugar is subjected to more rigorous processing and refinement to achieve the final granule like structure.

Even though jaggery is a better alternative to sugar considering its therapeutic nature, it must be consumed in moderate quantities as it is high in calories.  Although jaggery and refined sugar are derived from the same source, there is a subtle difference in how our body reacts to them. Table sugar is completely made of sucrose (50% glucose and 50% fructose) whereas jaggery is a composite of sucrose, invert sugar, vitamins, and minerals.

Sucrose splits up into glucose and fructose inside the body and both are used for their independent metabolic functions. Glucose is the main source of energy for our muscles and is immediately released into the bloodstream when consumed. Fructose, on the other hand, is not required by the brain or muscles and is mainly stored as fat.

When refined sugar is consumed, because of its simple structure, it is immediately broken down and released into the bloodstream. Whereas jaggery has a more complex sucrose structure and the metabolism involved is slower when compared to that of refined sugar. In addition to sucrose, jaggery also has vitamins like B-complex and minerals like calcium, magnesium, phosphorus, potassium, iron etc. that are absent in refined sugar.

In addition to sucrose and invert sugar, it contains proteins, fats, vitamins and minerals in small quantities unlike refined sugar, which is only made of sucrose. Each type of jaggery comes with variations in composition.

Even though jaggery has a nutritional presence to it, these nutrients are present in trace quantities and do not make a significant contribution to your diet. To grab a good dose of these nutrients you’ll have to consume insane amounts of jaggery (more than 100 grams) which is both painful and unhealthy. But in comparison, jaggery is a healthier choice considering the abundance of health benefits it offers (which we will explore shortly).

The sweetness of jaggery is comparatively lesser than that of refined sugar. To compensate for the sweetness of sugar you need to add 25 to 30% more jaggery to your food.

Even though jaggery is compositionally different, it is still a form of sugar and does not help much with diabetes. Refined sugar and jaggery have almost similar glycemic indices and lead to a sudden spike in blood sugar levels.

However, if you have diabetes under control and consume tea or coffee with sugar, replacing it with smaller amounts of jaggery helps in consuming less sugar and also gives you the health benefits associated with it.

Almost half the population on earth is trying to lose weight and searching for every other weight loss remedy available. Though some people claim that jaggery has significant benefits when it comes to weight loss, it is not so.

If you’ve been fantasizing about replacing refined sugar with jaggery and eating boatloads of desserts, drop that thought immediately. Evidence suggests that eating jaggery causes diabetes and weight gain in a similar manner as refined sugar.

Since jaggery helps in controlling water retention in the body, it was believed to help with weight loss. But, contrary to it, you need to consume more water to lose weight.

Jaggery is a derivative of cane juice and is also a form of sugar. Though refined sugar and jaggery have different compositions, they provide the same number of calories per tbsp which is in no way beneficial for weight loss.

Even if refined sugar is replaced with jaggery, the glucose and fructose present in it will eventually lead to fat gain. If you are serious about weight loss, the key is to go for natural or artificial sweeteners with low calories.

Jaggery helps immensely with digestion which can be a bonus in achieving your weight loss goals.

But when you see the bigger picture, your intention should be to control your calorie intake to see significant results. With the right calorie intake in mind, consume jaggery in healthy amounts daily and enjoy the other health benefits that come along with it. It is always better to consult a dietician before implementing it into your routine.

Jaggery comes in different forms with each type having its own set of benefits. Let’s explore some of the health benefits associated with consumption of jaggery;

Although jaggery has a popular reputation as a sweetener since the ancient Indian times, it is also used in curing throat and lung infections.

It is regularly consumed by people who are exposed to pollution. Jaggery is also used in the treatment of respiratory ailments like asthma.

Jaggery when combined with flax seeds or ginger helps cure joint pains due to inflammation. The ingredients have to be mixed together and consumed in small amounts daily for the treatment to work. The release of endorphins that comes with consuming small amounts of jaggery every day helps women in combatting symptoms of PMS and menstrual cramps.

In Ayurveda, jaggery is commonly used as a base for various medicinal syrups. Jaggery is the carrier for herbs in the treatment of constipation and rectal ailments. These medicines are administered through the rectal route and the low melting temperature of jaggery helps in administering the medicine. Jaggery otherwise when consumed orally also helps in treating constipation.

The nutrients in jaggery help relax the muscles and relieve fatigue. Its an ancient Indian custom (which is still followed in rural households) to greet a guest with a glass of water and jaggery as it provides instant nourishment and relieves fatigue. Consuming jaggery with milk provides a cooling effect to the stomach.

Jaggery acts as a blood purification agent and thus helps in treating skin issues like acne. It is also known to relieve tension in the blood vessels and ensures that blood pressure is properly maintained in the body.

Jaggery helps in treating the issue of water retention by the body as a result of excessive salt intake. When sodium in the bloodstream is increased, it holds onto water. This increases the thickness of blood and puts more load on the heart. The potassium in jaggery counteracts the effect of sodium and helps to solve the problem of water retention.

Jaggery is more commonly used during the winter months as it protects against cold by keeping the body warm. It also helps with common cold and cough. Consuming tea with jaggery, instead of refined sugar, will serve as a perfect start to your winter mornings.

Jaggery is known to clear the blood, boost metabolism and act as a cleansing agent. Jaggery also aids in digestion. People with acidity problem can get immediate relief by eating small amounts of jaggery after a meal. It balances the ph level, helps in alkalizing the body and thus reduces acidity. Jaggery also boosts intestinal health.

Jaggery has been an integral part of the Indian diet for many centuries. This grainy yellow-brown amorphous mass of sugar has a flavor superior to white sugar. If you come to like the taste, do not hesitate to make it a part of your daily diet.

It is also important to understand this subtle difference- Just because it is healthy does not mean that it can be consumed in higher amounts. There is always a jaggery vs sugar war going on. Considering the benefits and its therapeutic properties, it is definitely a healthier choice, but only when consumed in moderate amounts

On a special note, exercise caution while purchasing jaggery from the market. There are different types available and they differ in their manufacturing styles and the raw material used. For best results, buy pure jaggery that is not more than a year old. Also, make sure you purchase jaggery from a reputed seller as adulterated jaggery are also available in the market.