Home Poems by Rumi Rumi Biography: His Life and Teachings

Rumi was born on September 30, 1207, in Balkh, Afghanistan, which was then a part of the Persian empire. For this reason, Persians and Afghanis call Rumi ‘Jelaluddin Balkhi’.

Between 1215 and 1220, Rumi’s family fled Afghanistan from the threat of the invading Mongol armies and settled down in Konya, Turkey. It was here that he assumed the name “Rumi” which means “from Roman Anatolia”. Rumi’s father was a theologian and a mystic who kept a collection of notes with remarks and strange accounts of visionary experiences. Rumi was made aware of his father’s secret life by a former student of his father.

After his father’s death, Rumi took over the position of sheikh in the dervish learning community in Konya. He became a well known religious scholar and led a normal life until he met a stranger who asked him a question which made the learned professor faint to the ground. That stranger was none other than Shams of Tabriz who had traveled throughout the Middle East searching for a person who would “endure his company”. The question which was put to Rumi is still a mystery and scholars across the world have different versions of the encounter.

Suffice it to say, once Rumi heard the depth of the question, he fell to the ground. From that day forth, Rumi and Shams were inseparable. The two friends spent months together in conversation and their ecstatic connection caused difficulties in the religious community. Rumi’s students felt neglected. Sensing the trouble, Shams disappeared as abruptly as he had appeared.

It was this disappearance that transformed Rumi into a mystical poet. But Rumi could never forget Shams. He sent one of his sons, Sultan Velad, in search of Shams to bring him back to Konya. When Rumi and Shams met the second time, they fell at each other’s feet.

Shams stayed in Rumi’s home and was married to a young girl who had been brought up in the family. Again the long mystical conversation began and again the jealousies grew.

On the night of December 5, 1248, as Rumi and Shams were talking, Shams was called to the back door. He went out, never to be seen again. The mystery of Shams’ absence covered Rumi’s world. He went in search of Shams and travelled to Damascus where he finally realized:

Why should I seek? I am the same as
he. His essence speaks through me.
I have been looking for myself!

The union became complete. Rumi wrote a huge collection of poems which he called The Works of Shams of Tabriz.

After Shams’ death, Rumi found another companion, Saladin Zarkub, who became a friend to whom Rumi addressed his poems. When Saladin died, Husam Chelebi, Rumi’s favorite student, assumed this role.

Rumi claimed that Husam was the source, the one who understood the vast, secret order of the Mathnawi, one of his most influential works that shifts fantastically from theory to folklore to jokes to ecstatic poetry.

For the last twelve years of his life, Rumi dictated the six volumes of this master work to Husam. He died on December 17, 1273.

Rumi believed passionately in the use of music, poetry and dance as a path for reaching God. Like other Sufi poets of Persian literature, the general theme of Rumi’s thought is that of Union with the Beloved (tawhid). His longing and desire to attain this union is evident in this poem from Mathnawi:

I died as a mineral and became a plant,
I died as plant and rose to animal,
I died as animal and I was Man.
Why should I fear? When was I less by dying?
Yet once more I shall die as Man, to soar
With angels bless’d; but even from angelhood
I must pass on: all except God doth perish.
When I have sacrificed my angel-soul,
I shall become what no mind e’er conceived.
Oh, let me not exist! for Non-existence
Proclaims in organ tones,
To Him we shall return.

Rumi’s poems have been translated into many languages and he is widely credited as “most popular poet” and the “most-read poet” in the United States today. 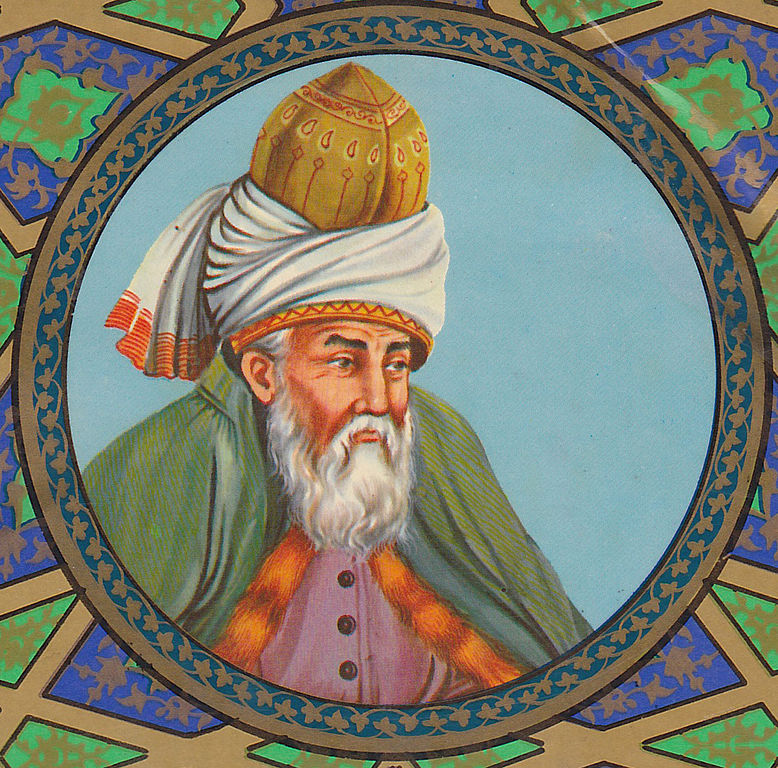 The Guest House: A Poem by Rumi